A thriving town set at the mouth of the estuary and facing out over the vastness of the ocean.  Discover this trans-Atlantic port back in the days when its focus was Central America and from whose docks were launched the giants of the seas including l’Impératrice Eugénie, le Cassard, le Normandie, le Jean-Bart or le France.   Saint-Nazaire is still today inextricably linked to its  naval industry, which together with the town of Nantes they form the entity known as Le Port Atlantique. Mistreated by the violence of historical events between 1940 and 1942, the town of  Saint-Nazaire and its people have successfully healed the wounds of this tumultuous period and turned the spot light on their maritime heritage by restoring its submarine base, which is today a major tourist attraction and venue for cultural events. The town of Saint-Nazaire be it of the past, present or future is a site well worth a visit, off of the beaten track you’ll get to see:  at le Vieux Môle Tintin’s orientation table, the outer-harbour with its tugboats, fishing huts with their square suspended fishing nets and the ‘crab-claw-shaped’ jetty, the area which is both charming and typical made famous by a Jacques Tati’s film character called M. Hulot on holiday in Saint-Marc-sur-Mer. 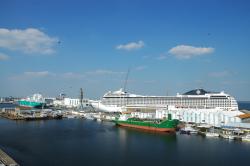 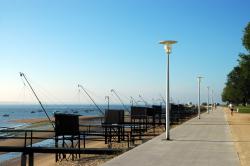 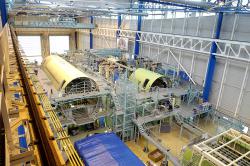